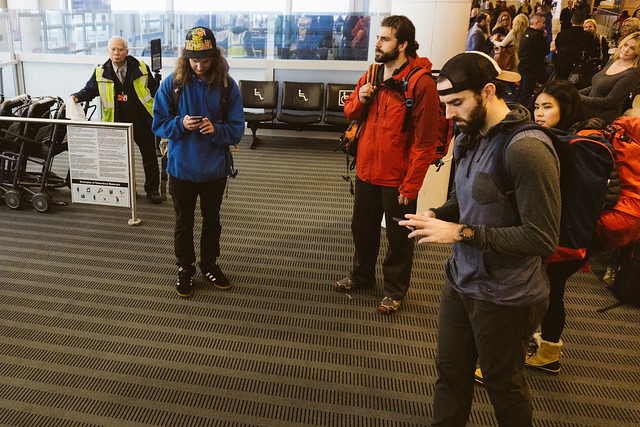 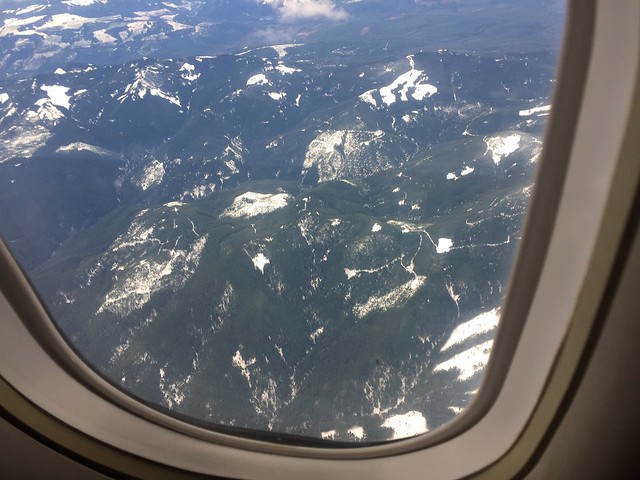 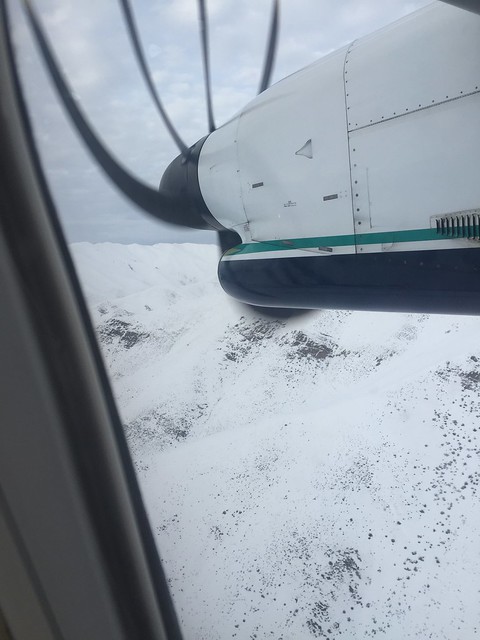 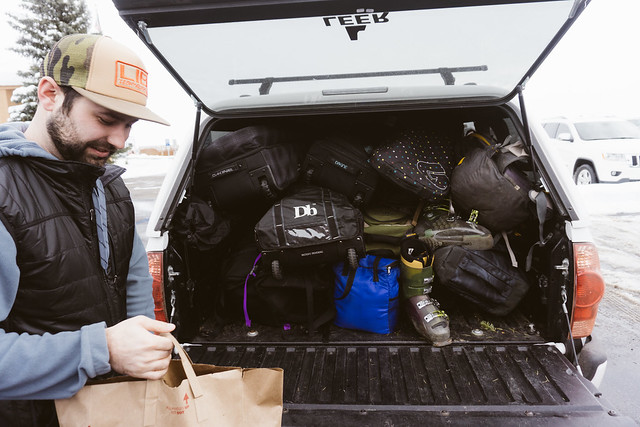 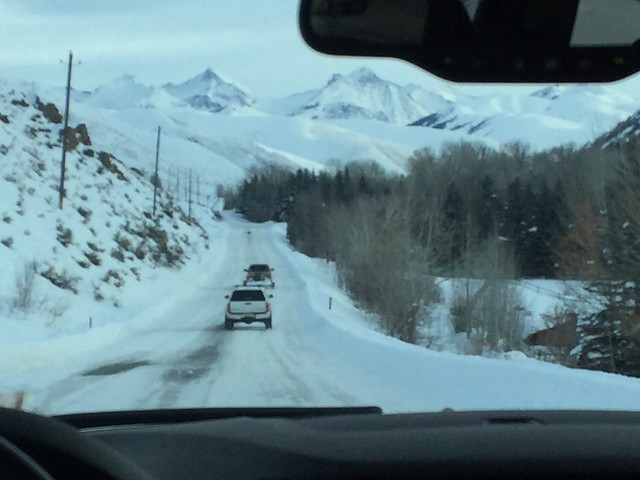 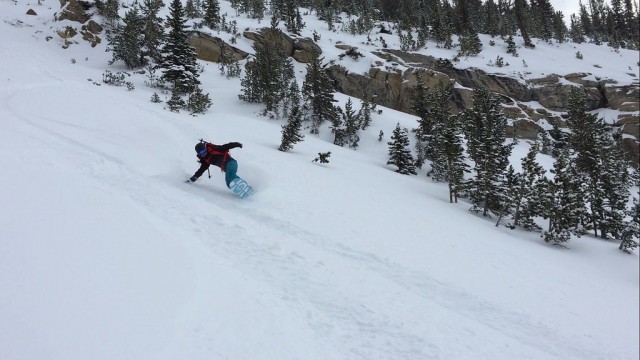 Tiff laying one down 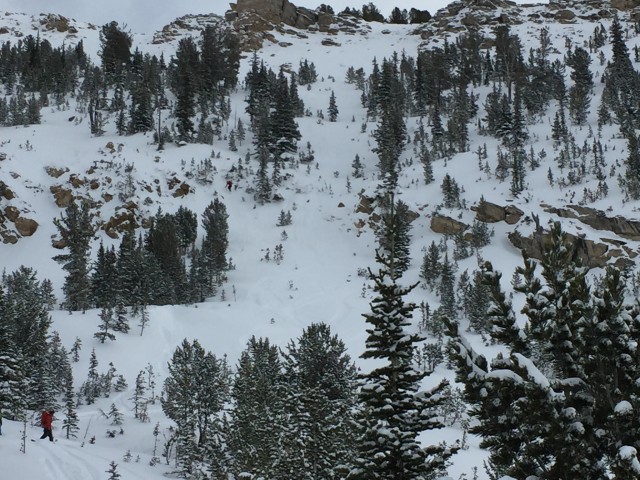 Eyeing our couloir from the bottom of Cobb 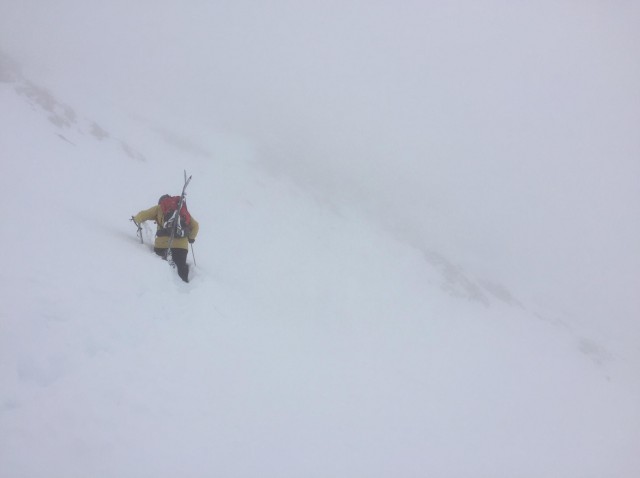 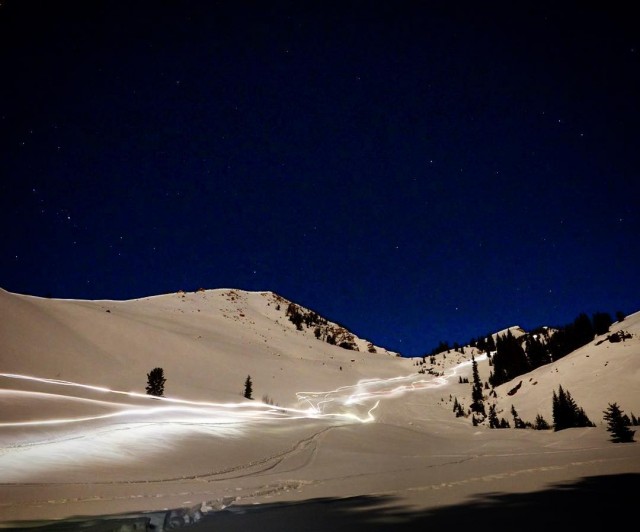 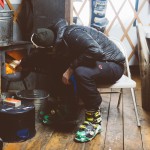 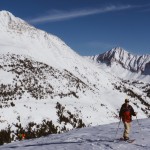 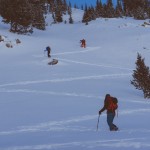 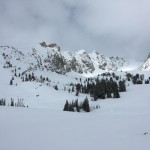 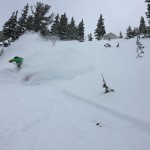 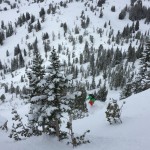 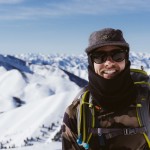 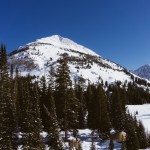 What happens when 6 peakers commit to a moderate Saturday tour off Highway 2? We weigh accessibility, snow stability and snow quality to select a suitable tour for the day. We had the following constraints to work with:

We chose Jim Hill Mountain for the following reasons:

The results were solid. Major takeaways for those doing the tour:

Here’s the play by play… 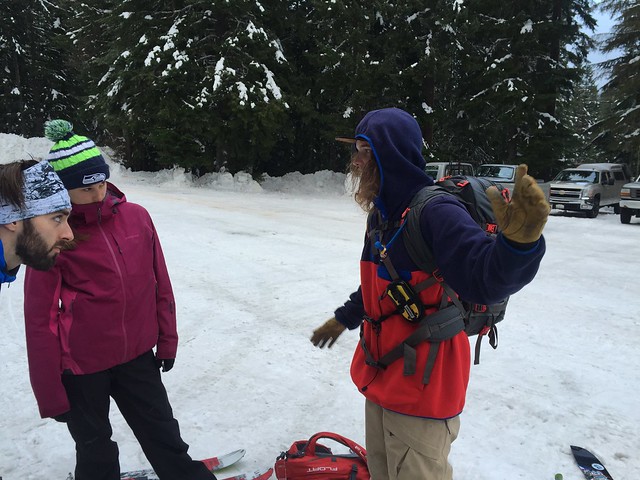 We set out from the Nordic Center through the woods. The trail is well marked and well traveled. We don’t do much route finding. The route climbs gradually toward Lanham Lake along the west side of the drainage.

We arrive at the lake, eat a quick snack and follow the skin track across the lake continuing up the valley. Visibility is poor, but we see the lower slopes of Jim Hill ahead. 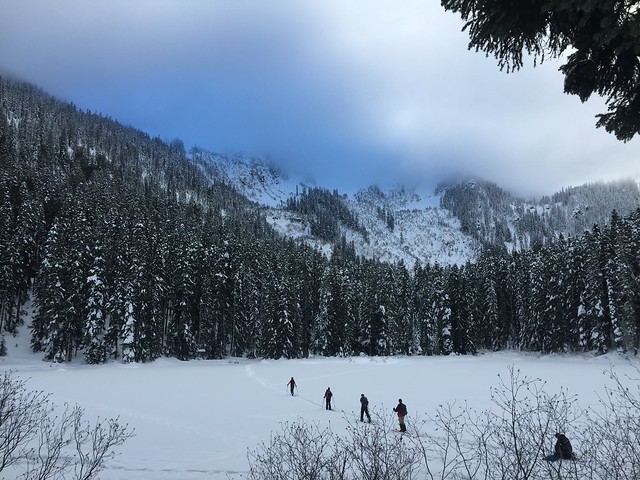 We stop to consider route options. The existing skin track doesn’t head “up” the way we expect it to. We question whether or not we went to far up valley. From Backcountry Ski & Snowboard Routes Washington, we know the route ascends the valley’s eastern slope and gains the ridge at 5500 feet. After several minutes of discussion, we cut back and across that slope. 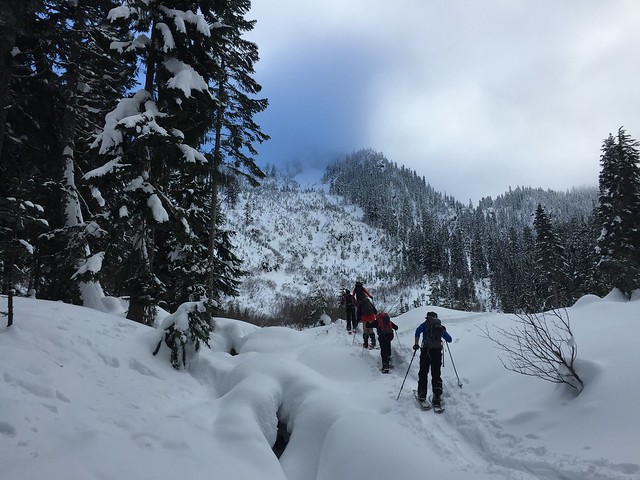 We approach the head of the valley and start to question our route. In retrospect, we should have started climbing the ridge at the lake.

We pay dearly for our navigational error at the lake. Sam sets a fierce skin track to get us back to the standard route. The trees are tight and the hillside steep. Ultimately we boot up a 150m section to get through the worst of it. Brian steps on a submerged tree and drops 4 feet into the snow. Go left at the lake, you’ll burn a lot less energy.

Things go faster once we connect with a skin track that climbs moderately toward the ridge. Up on the ridge, we approach the bottom of the cloud layer. We entertain the idea that we might break through. 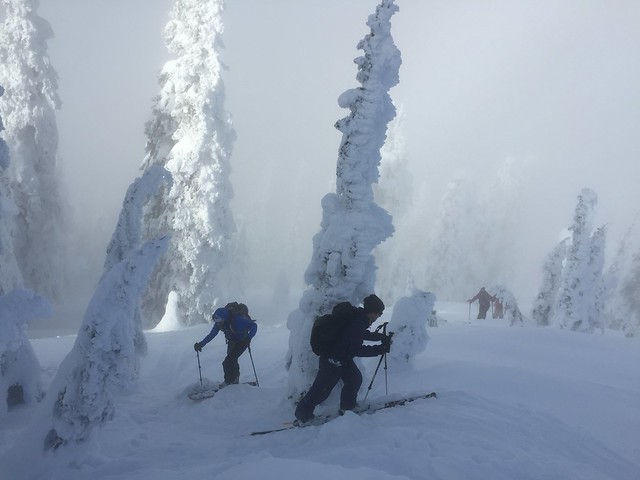 Skinning on the ridge, seeking the sun

We have  a decision to make… We’re on the ridge facing south towards Jim Hill. To our left, is a bowl with tracks and people descending toward Henry Creek (the other ascent route). We see a saddle that provides access to a ridge that leads to Jim Hill. However to reach this, we need to traverse/descend into the bowl, then climb to the saddle.

To our right is a continuation of the ridge that we’re already on. There’s a saddle just west of the peak. If we can get to that saddle, we will boot the last two hundred feet to the peak, enjoy the views and descend.

We decide to head right. There’s another group behind us that heads left.

The ridge terminates in the upper slopes of Jim Hill Mountain. Sam and I survey the bowl below the peak and immediately notice the debris of a large slide. 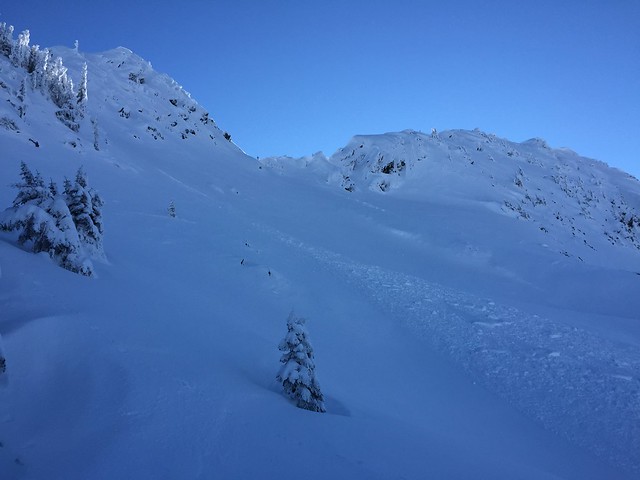 We see another debris field further up the bowl, under the saddle to the right of Jim Hill. We’re in a safe place, so we wait for the group and study the terrain. We see evidence of wind affected snow close to the ridge line. NWAC listed wind slab as a potential risk for the day and this confirms that there’s high risk on the terrain ahead. After discussion with the group, we decide to descend the same way we came up. 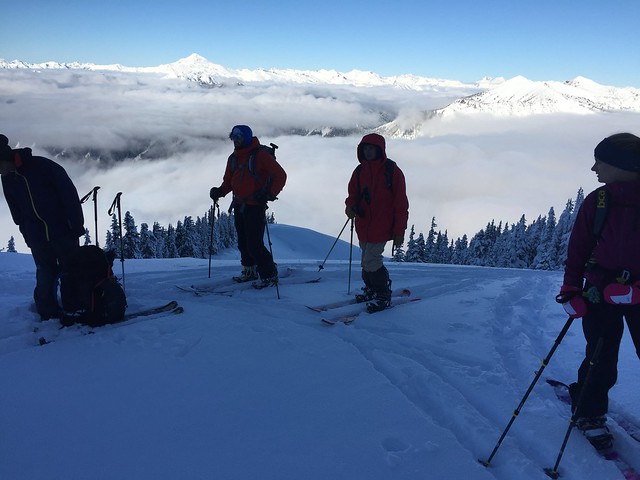 Making the call to turn around. It’s cold in the shade

We hug the ridge on the way down as we drop towards Lanham Lake. We find many open powder pockets in the trees. 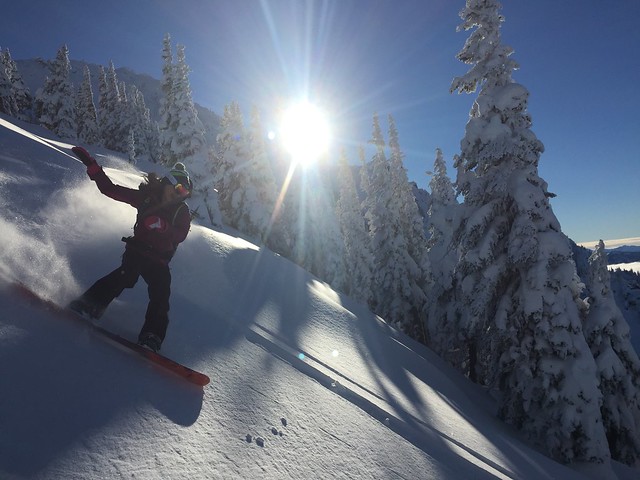 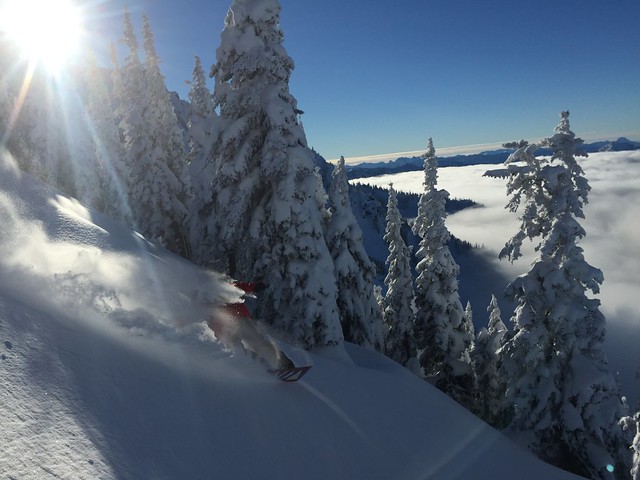 The trees are quite dense in places, and the terrain is steep. We proceed with caution and stick together. 2,000 feet of deep powder turns to the lake before conditions turn crusty.

Overall, it was a great day. We considered terrain carefully and made turns in deep, dry snow. With more knowledge and time to explore, you could access some excellent terrain. We’ll be back.