Lake Tahoe is California’s premier summer playground. Flooded with tourists longing for beachy days, boozy boat rides and immaculate mountain views, it can be a challenge to find solitude in these mountains. Winter, however, is when the real magic happens. Luckily for Mark and I people seem to shy away from the piles of snow and cooler temps of winter.

Despite the cold and stormy weather that had defined the season, cold temps were not in store for us. Lows were lingering around the high 30s and 60 degrees was going to be our top end temp for the day. With an understanding that quality snow was going to be hard to come by, we headed south from Marks squaw valley residence toward Emerald Bay. The goal was to get to some views and find a chute that’s rarely in due to waterfalls and cliffs at the terminus of the route on an average snow pack year. Average is not a word we’ve been using this year here on the west coast. 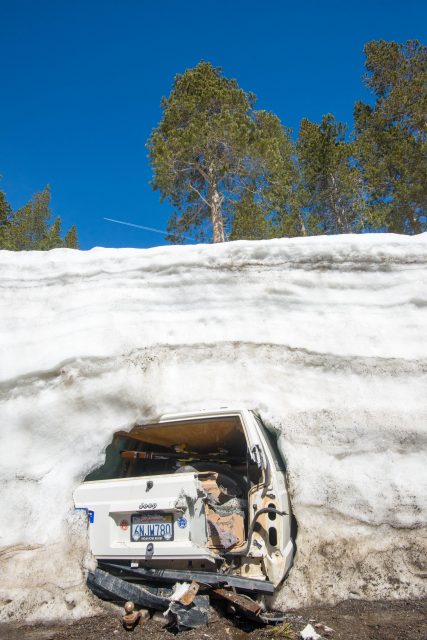 With over 600” of our favorite substance deposited by mid march, the Emerald Bay Chutes were fully in. We hoped it wouldn’t get too sun baked but when we arrived at the TH at 9:30am a couple had just come off the main descent from Jakes peak and said it was already punching through.

We started up the first pitch which was mellow and gained about 800′. Very easy cruising and no real skin track to follow as there were tracks running in every direction. Choose your own adventure. 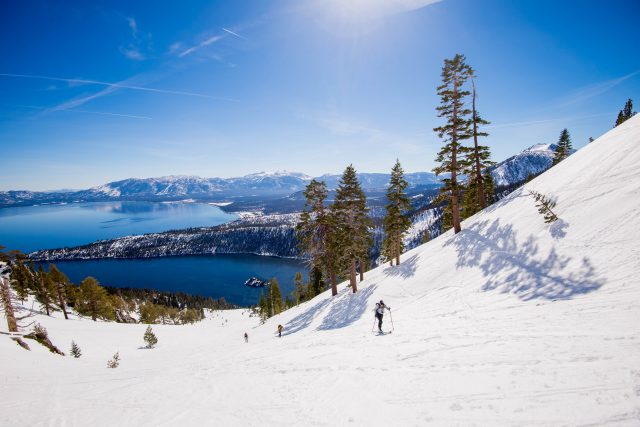 After contemplating a route up and through some trees, an avalanche path seemed to be the most direct and avy danger was low. Wet loose was the only concern and given the terrain below we weren’t concerned about being carried a little ways if something small were to peal off. We opted to boot up most of this pitch to attain the saddle between Jakes Peak and Peak 9195′. Only a couple hundred feet of vert separated us from our peak. 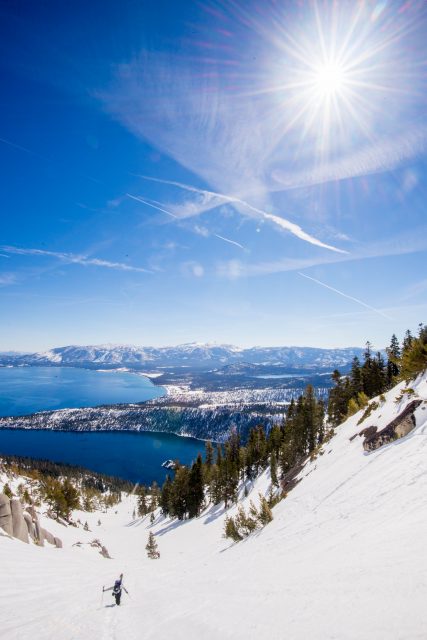 Our line was along the south ridge of Peak 9195′. We’d scouted the two chutes from below and I was hot on the one further south. Mark and his new, untested boots were pushing for the more mellow north line. We made our way down to the south line to have a looksy. While on top of the glory run we had a conversation and agreed to boot back up the ridge and go for the more tame line.

Just as we unclipped to head back up the ridge, 4 skiers came tearing down towards us. Mark yells “Hey Kioki!” It was one of his ski cinematography buddies from decades ago. It seemed everywhere we went Mark knew someone. Luckily for me, Mark was easily persuaded after watching this crew go for the line. 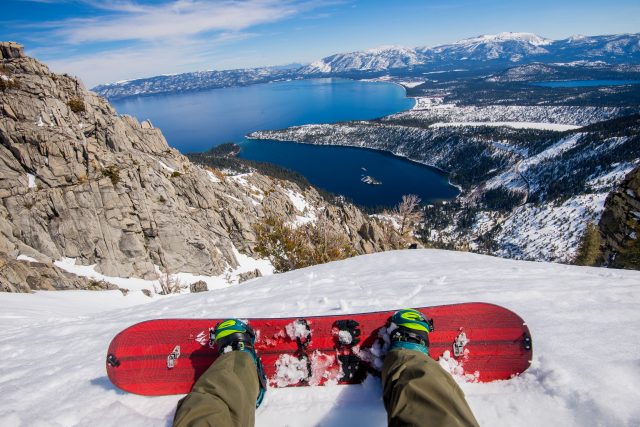 The first couple turns were steep. Pow turned to unconsolidated mush seemed very challenging on skis. On the board I felt like I was surfing. Sub optimal ski conditions would not be the conversation piece regarding this line, however. With views of desolation wilderness to the west, Lake Tahoe and Emerald Bay to the east, it’s hard to find a zone that’s more aesthetically pleasing.

Sheer granite walls on either side gave us a wide enough chute to surf the walls of snow that had been peeling off the rock through the season. It was essentially a wide and steep natural half pipe for much of the 2000 vertical foot run. As we spit out the end, the water was roaring underneath the snow pack and it was clear that the cliffs and waterfalls would be exposing themselves within the next couple weeks. 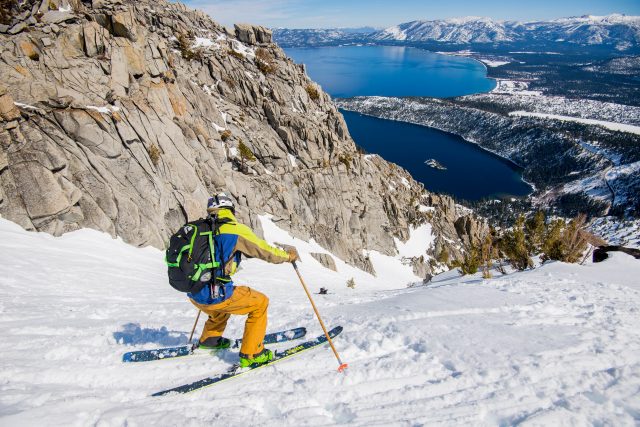 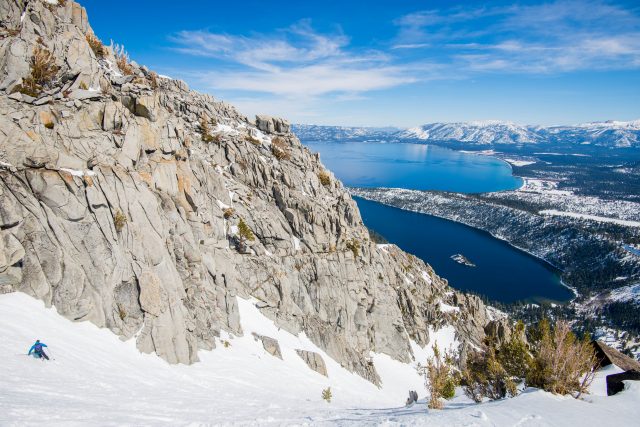 Full of cheer, we gathered around Kioki’s van and peeled open a beer. This tour certainly left me wanting more form the region. It’s all about timing with this one but if it’s in, it’s on!