It’s Friday evening, and Zach and I had just been set up by our mutual friend Whitney to climb and ski Mt. Rainier together over the weekend.  We had both been looking for partners to attempt the Fuhrer Finger route, and had both approached Whitney about skiing the Finger.   The Fuhrer Finger is an extraordinary ski mountaineering line; it takes a direct line up a south aspect of Mt. Rainier, and gets its name from the 3000 vertical foot, 40 degree chute located about two thirds of the way up the route, called ‘the finger.’  Some sources cite it as the biggest ski descent in the lower forty eight, but I’m skeptical of anything with a ‘biggest’ quantifier in front of it.   It’s definitely up there, a rad line, for sure.  In good conditions, the entire 9000 vertical feet of the route is ski-able on the descent, with the option to extend that even further by skiing to the Nisqually bridge.

After reviewing our 2-person crevasse rescue skills, we talk about details on the route.  There’s a risk of rockfall within the finger, which is heightened later in the day as things heat up.  There’s also the risk of loose-wet slides later in the day.  Timing on ascent day will be critical, as you want to be descending after the snow has softened up enough to be ski-able, yet before the rocks start firing down from above, or before the snow beneath you becomes warm and unstable.  Based on the predicted warm weather, we set a turnaround time of 11AM for summit day

Saturday, 12:00PM: We arrive at the Paradise Parking lot. We gather our permits and gear, and hit the trail at 1PM

The weather for our ascent was warm and sunny.  Just before dropping down to the Lower Nisqually Glacier, we got a nice view of our planned route.  We chose to hook low and left around the Wilson glacier and gain the ridge to camp, rather than picking our way up through the middle as some do.

Both the Lower Nisqually and the Wilson were in great shape – neither ourselves nor the other two parties we ran into opted to rope up for these glacier crossings.

Saturday, 6:00PM: Arrive at camp .  If you camp by the castle, there’s currently nice, clean, running water by the upper sites.  We skipped the water boiling routine, and haven’t gotten giardia, yet.

Sunday, 2:30AM:  Summit day!  We hit the trail and cross the Wilson glacier to begin the bootpack up the finger.

Around 4AM, despite it being the coldest portion of the day, a softball size rock came flying down the finger between Zach and myself.  Although jarring, that rock was the only rockfall we witnessed throughout the day.

At the top of the finger we went high and left above a serac before hooking right onto the Upper Nisqually Glacier.

We roped up here. The upper Nisqually was still in great shape – only a couple of snow bridges to cross on the way to the summit.

Slow going on the last couple thousand feet. We chose to continue booting, however, skinning with ski crampons would have been an equally reasonable choice. A group of Canadians did so, and we played rope team leapfrog for a while.

11AM: Summit! We snacked and transitioned quickly, as we had just barely made our turnaround goal. Just enough time for a ski guitar summit picture :).

Conditions were perfect corn on the way back to camp. The terrain was fantastic, and the scenery unbeatable.

We took a leisurely pace packing up camp, and ended up getting back to the car around 4PM.

What a fantastic weekend on the mountain. The Fuhrer finger delivered everything that was expected, and more – absolutely worthy of it’s reputation as one of the best ski mountaineering descents in North America.

A week of sun and 70 degree temperatures in the city will begin to induce touring withdrawal symptoms for even the heartiest of peakers. With raging monkeys clawing at our backs, we set our weekend sights for a fair-weather summit attempt of Washington’s 3rd highest mountain and stratovolcano, Mt. Baker (10,800′). The snowpack this year has been deeeep, and with summer weather forecasted for the mountain, conditions looked ‘absolutely splitter’ – to quote D.B. Kiker himself.

For Brian and I, this would be our first experience with glacier travel so a large part of the trip was educational. If you happened to be at Gasworks Park last Thursday, then yes, we were those kooks pretending to rescue each other out of imaginary crevasses in the grass.

We chose the Easton Glacier route, and Ranger reports indicated that the road was still snowed-in for about mile before the trailhead.

1:00 PM: Parked the car at 3000’ elevation, threw the splitboards into tour mode, and hit it. A large section of un-snowed dirt road about 100 yards around the first bend in the road forced us to portage the boards on our backs for a bit, but trailhead access was uneventful other than that ~ 1 hour. 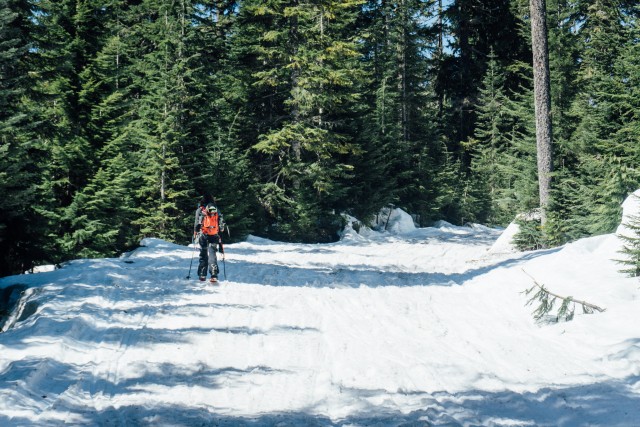 We followed the well-defined sled trail about 1500 vertical feet from the trailhead up to the start of railroad grade, where the sled tracks broke-off into the valley above. 3:30PM 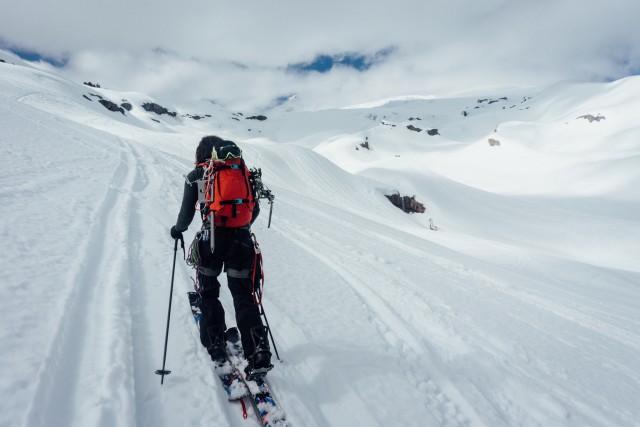 ** Garrett starting up the valley – railroad grade on the left. With the snow from earlier in the week compacted and wet from the heat, the snowmobile tracks made for easy touring.

6:00PM: With daylight waning, we exited the north end of the valley, and set up camp at 6500’, just below the Easton Glacier. The night was clear and the views were spectacular. 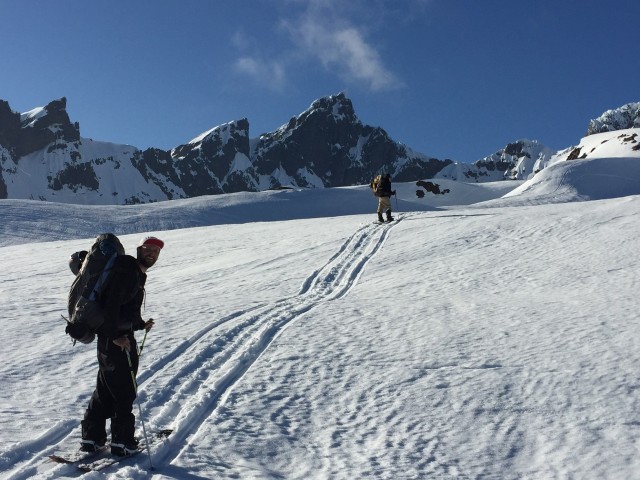 **Brian and David scoping out a campsite 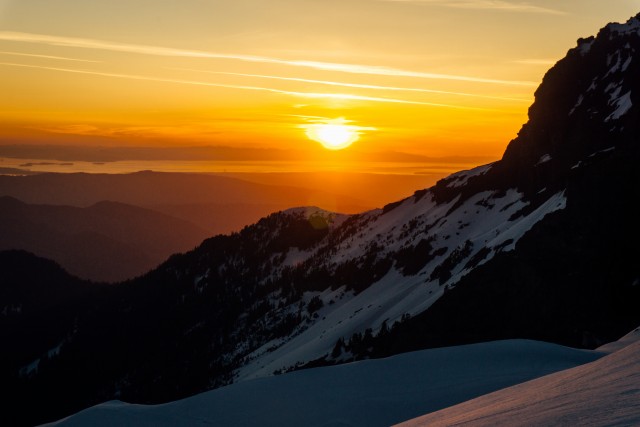 **Sunset view of the San Juans 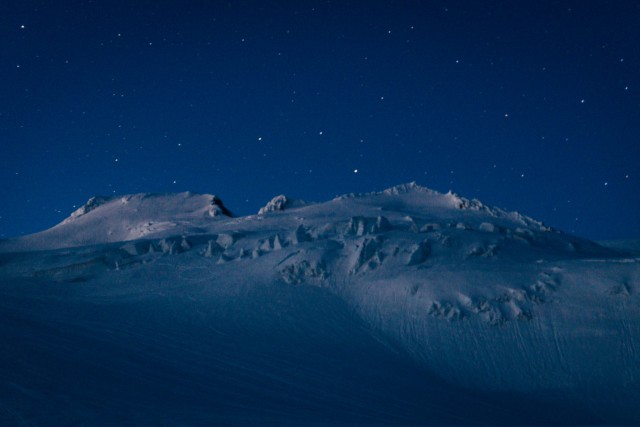 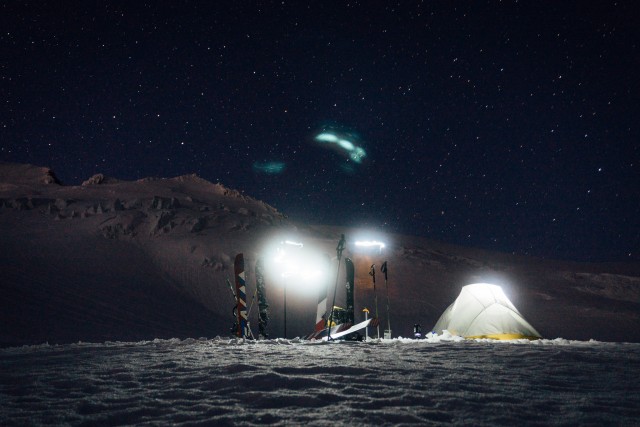 **Turning in for the night

3:00 AM – Wake-up. Clear sky allowed the temperature to drop overnight and freeze snow. A leisurely morning of pacing for warmth, hugging warm coffee mugs, and packing camp leaves us ready to hit the trail at 6AM. Splitboard crampons required. 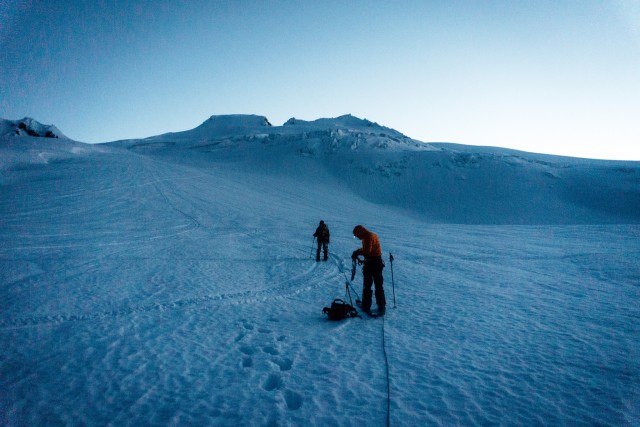 **Roping-up to start the day. We ascended through the saddle to the NW (top right), then pointed directly to the Sherman Crater.

The snow was very firm throughout the morning, but splitboard crampons made short work of the first 2200’. At 9000’ the grade steepened, necessitating a switch to boot crampons and board carry to the Sherman Crater. 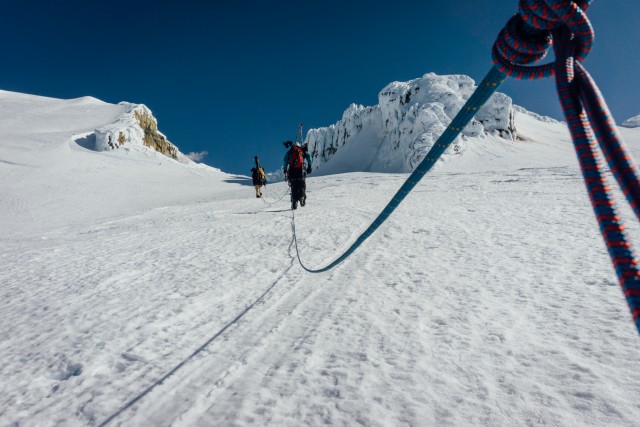 ** Approaching the Sherman Crater. Roman Wall to left. If you look real close, you can see two people (dots) just to the edge of the shadow formed by the left crater.

This early in the season there was minimal crevase exposure. Throughout the ascent and descent we saw just 2-3 open crevasses that were small and easily avoidable. Worth noting that it’s important to remember the location of these for the snowboard descent, else you end up having to do a last second emergency ollie. 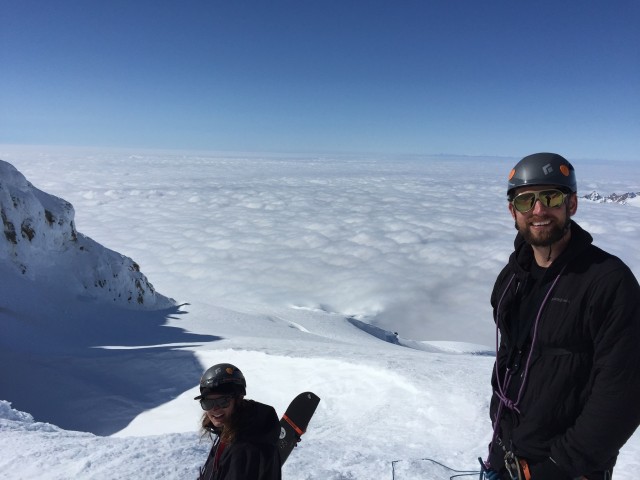 *David and Brian taking a breather 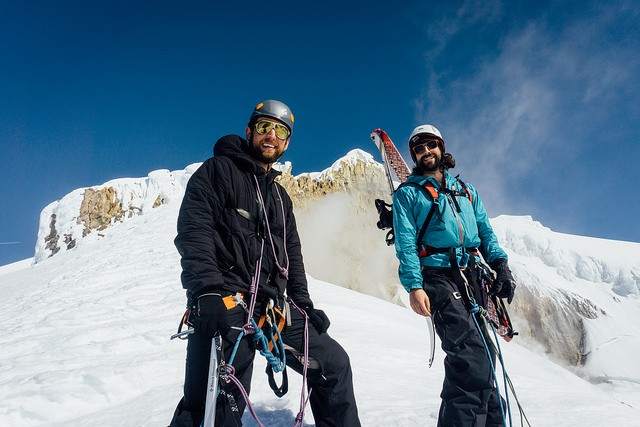 **Brian and Garrett on the Sherman Crater lip 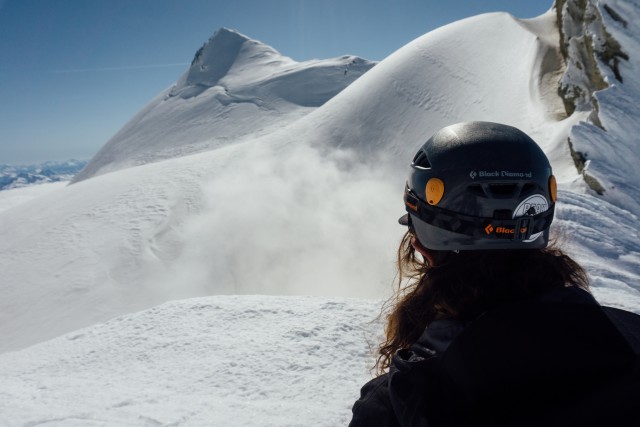 **David contemplating the meaning of life 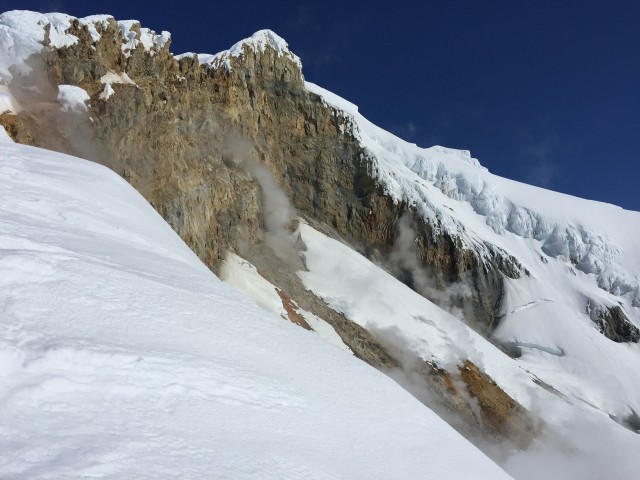 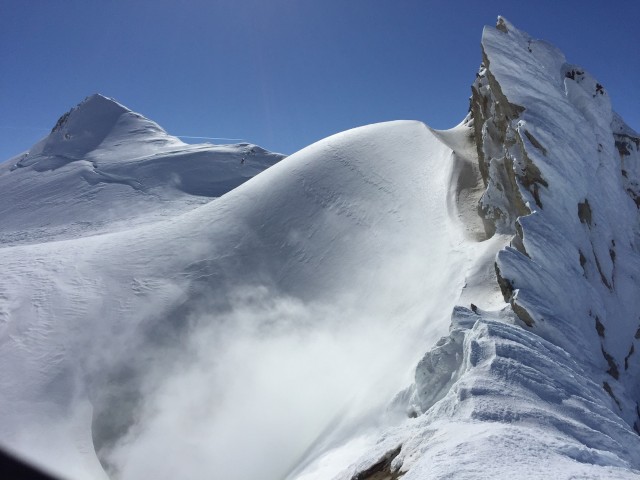 Revitalized, we cramponed our way to the summit by noon with boards on our backs. At this time of day the Roman Wall was very steep and icy – even a boot crampon ascent felt sketchy. 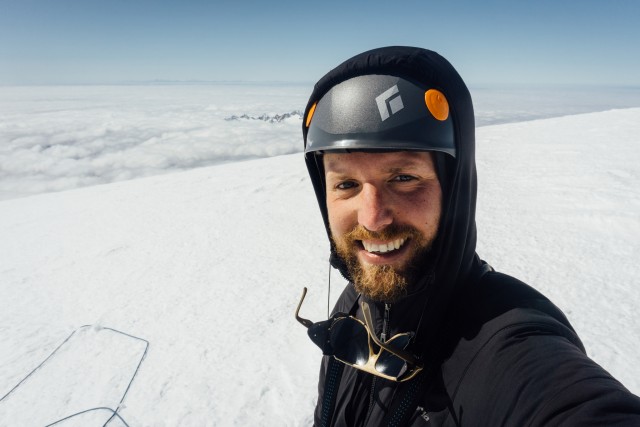 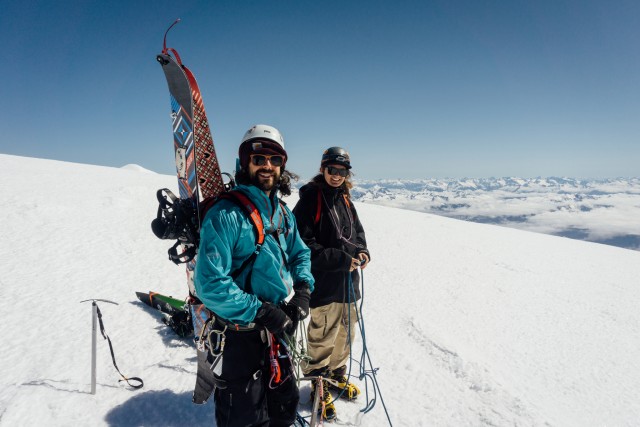 Fearing that the bottom of the mountain would become a slushy mess, we strapped on our boards and rode down quickly after reaching the summit. In retrospect, we could’ve waited until ~1PM to descend – which would’ve made the roman wall a bit more enjoyable.

Phenomenal Corn skiing was to be had below the Sherman Glacier. Packed up camp quickly at 6500’, and snowboarded the remainder of the way out.

3:00 PM: Arrival back at the trailhead