I’ve said it once and I’ll say it again, if it wasn’t directly in the shadow of Mount Rainier, the Tatoosh range would be it’s own National Park.

The gate into the park was a little late, opening at about 9:30am. We drove from Longmire up to Narada Falls under a nearly cloudless sky. Crossing the Nisqually bridge we considered skiing the Nisqually Chute but instead stuck with our original plan to head towards Lane Peak.

From the parking lot there was obvious debris on the apron below the Fly and Zipper couloirs from what was likely loose-wet activity the day prior. Considering the northern facing aspect, it looked like there was potential for crusty conditions but the trees were holding good snow and skinning up to Stevens Canyon Road from the falls we found light powdery snow that we were hoping for reassuring us on the conditions. 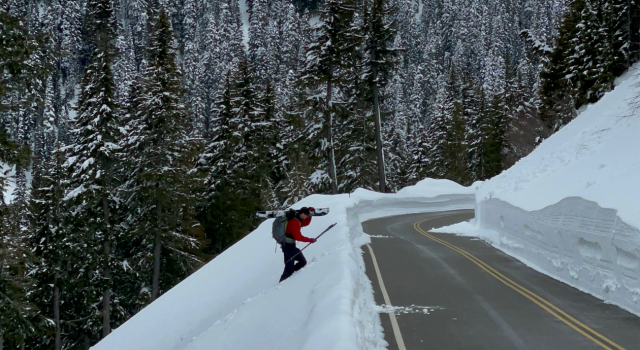 At this point in the season Stevens Canyon Road has been plowed so we threw the skis over our shoulder for the short walk to the bend were we transitioned and rode the trees down to Tatoosh Creek trending west toward the base of Lane Peak.

Now the clouds came in on what had been blue sky all morning and it began snowing heavily. Crossing the creek we passed a group who was bailing due to avalanche concern. We continued on, following the skin track of an another group who appeared to be heading for the adjacent Fly Couloir.

Up until this point we had not committed to a specific objective, instead keeping an option open to ski either the Fly or the Zipper Couloir. At the tree stand that sits where the base of the two couloirs meet we decided to boot up the Zipper, being the steeper and narrower of the two as the group ahead of us was going for the Fly. 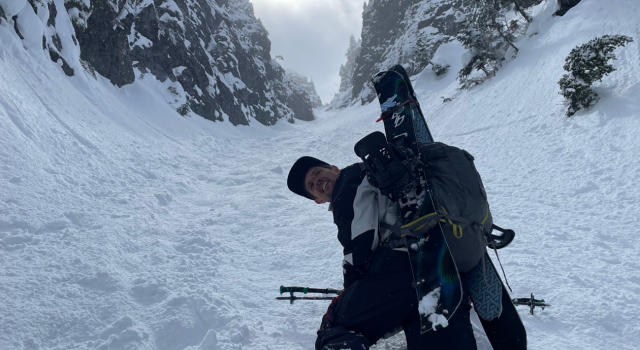 The climbing started out in thigh deep snow making for slow going, however as we ascended the booting eased up. As we climbed the snow began to warm and drop off the tree branches on the walls above. As the trees bombed the couloir the snow would pick up speed and mass flushing the slope we were on and creating significant loose-wet slides that could easily take you off your feet. We picked up our pace to minimize our time in this hazard zone and finally finished the remaining 500ft of the couloir by 1:30pm with no major incidents.

This time of year the gate is closing at 4pm and not wanting to get stuck in the park we hurried our transition to drop in. The day was still warming as well and the wet slides in the couloir were increasing in their frequency and volume. We skied the length of the couloir one at a time to reduce our exposure.

The turns in the couloir itself were incredible. The snow was soft and loose. A little too loose as sluff mitigation was critical after almost every turn. The apron had a lot of debris on it and made for some chunky skiing in spots. After this the snow warmed significantly slowing us to a crawl by the time we returned to the creek. 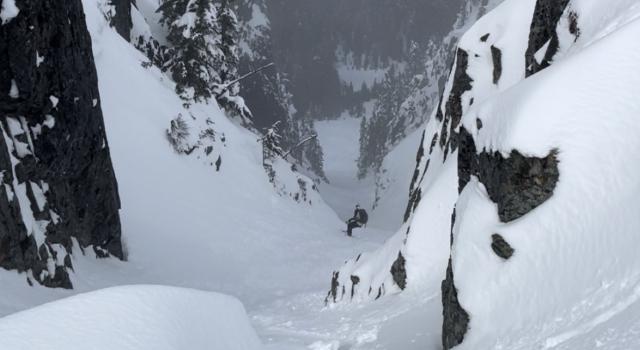 From here it was back up to the road and then a ski down to the car. We hit the gate at 3:50pm just before close.

We got lucky with the conditions. The skiing was great but the avalanche activity due to late spring sun on a northern aspect was much more than we anticipated. As is often the case it became a matter of timing. We got up and down without issue but any later in the day and we would have surely experienced significant hazard. Either way, another amazing ski line in Mount Rainer National Park.