It has been a bit since any peaks were logged on the peak of the week. So The Grand is a good one to break up the drought. The climb was going to happen several different ways, including an original plan to camp overnight in the meadow and climb the Full Exum Ridge on the second day, but I was told that the weather in Jackson has been grey for a lot of the summer and the week of our planned climb was not an exception. Since Thunderstorms were threatening on Wednesday we decided to forgo the Lower Exum Ridge and try to climb the whole thing via the Upper Exum on Tuesday.

Me and Nick started off from the Lupine Meadows trailhead at 4:15 am. The early hours in the dark always goes quick and we were rounding the corner into Garnet canyon by the time the sun was coming up a little after 5:30 am. From there we started checking off the various campsites as we went by. First the meadows, then the caves, then a detour right, up to Jackson Hole Mountain Guides camp were they corrected my course and I reunited with Nick down at the moraine camp. It is kind of hard to get off track here but I saw the guide huts up on the hill to the right and figured they were on route. As it is, the trail stays low and runs pretty much a straight shot up to the saddle. 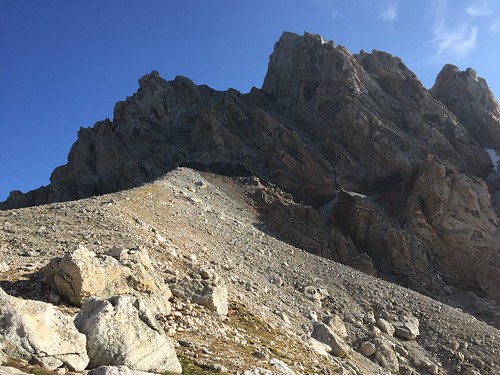 From the moraine it is about 900 ft up to the lower saddle at 11,650 ft where the Owen-Spalding and both the Exum and Petzle Ridges really come into view. We stopped to refill the water bottles at a garden hose that utilizes a spring and then headed north up toward a black dike in the rock. At this point you have options for what you want to attack. The Owen-Spalding continues the obvious trail to the upper saddle. The Lower Exum access cuts way right to a chimney you can see on your way up.

We continued toward the upper saddle and then cut right at 12,500 ft across a big gully to Wall Street, a big ledge on the west side of the ridge. Here we roped up for the rock section of the climb. It was around 10:30 or 11:00 am at the point and the ledge is in the shade until you come around the corner to the jump off spot. It is a fairly easy move but very exposed. While doing it, it is wild to imagine Glen Exum leaping over it in his original 1931 solo climb of the route. 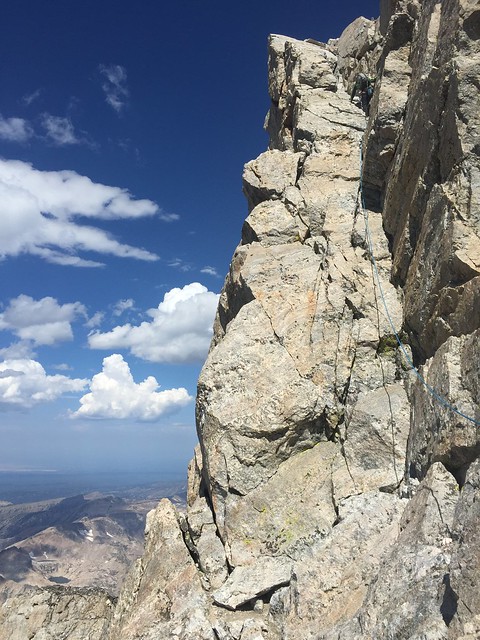 The next few pitches included the Golden Stair and the Friction, which aside from those two we simulclimbed much of. Nearing the top we cut left, and climbed the V pitch, my favorite of the day. After that we wandered around until we hit the summit, topping out around 2:00 pm. 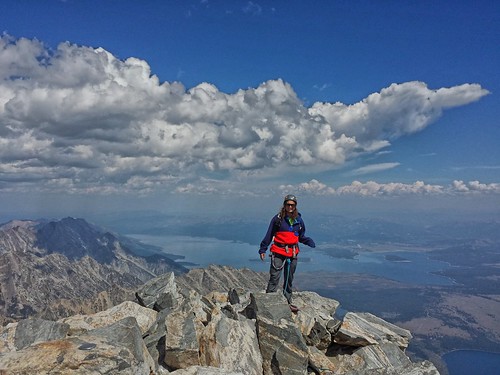