It was with variable spring weather in the forecast that Tim and I started game planning a Sunday tour. Originally looking at the goat rocks region, notice of a washed out road changed our plans. We started looking east and found decent weather as close by as Leavenworth. With icicle creek road bare and dry we opted for a tour off its flanks. Cashmere seemed to be a good option. We tied up the hiking boots and headed up toward Lake Victoria from FS 7605 (elev 2400′). 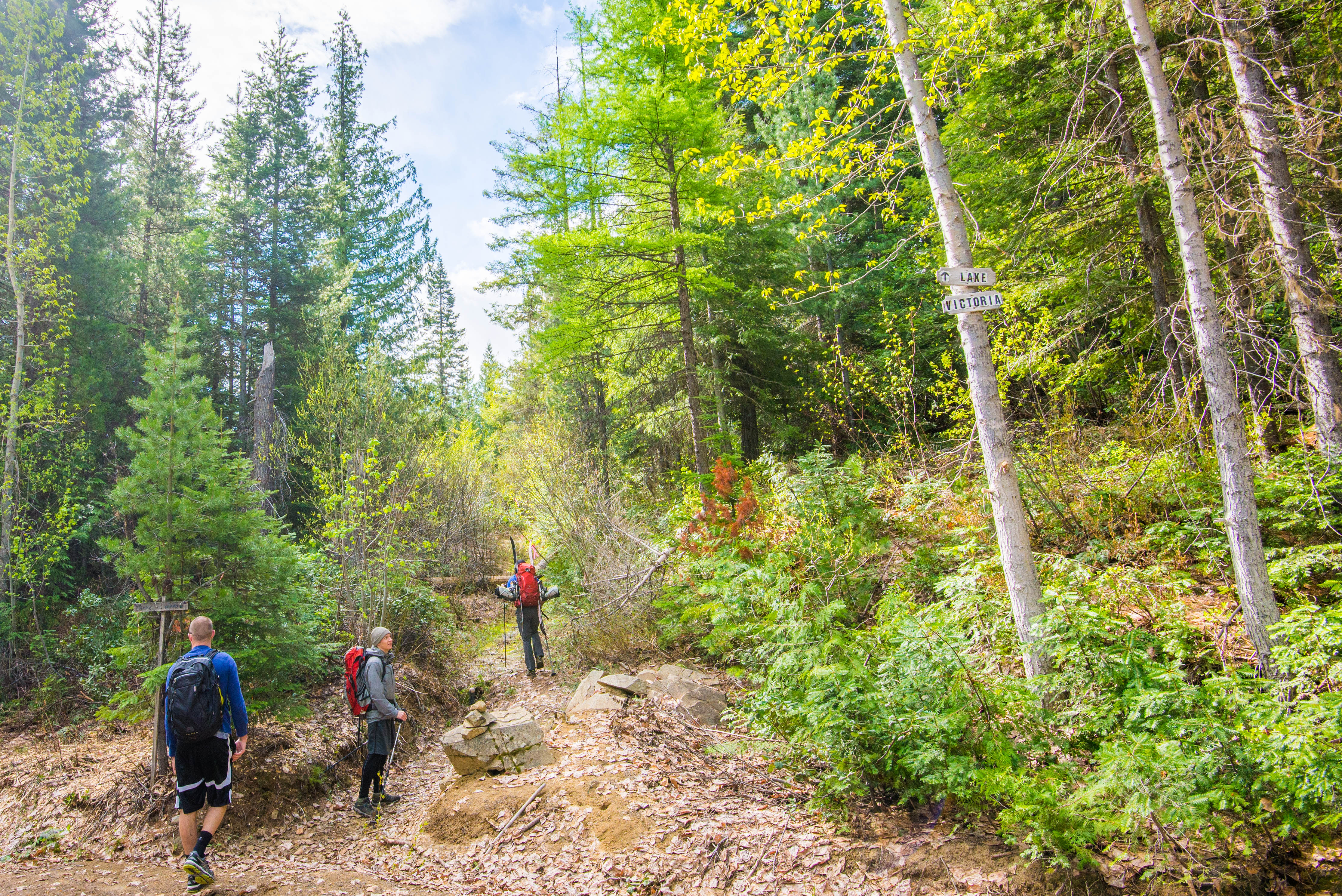 After getting out of the lowland brush, a sweet couloir off the north ridge of Cashmere mountain presented itself. It seemed complicated though. Aside from questions of whether the thing even got us off the rock face, Victoria Creek had started roaring with the snow melt and would possibly separate us from being able to get back to the trail.

Tim eyes up the couloir to the left, Johnny V scouts the trail

Another angle on the couloir

We kept booting until we hit a reasonable snowpack at 4700′ and tossed the hiking boots for the snowboard boots. Skinning was challenging at parts with a lot of melted out terrain. In hindsight, skinning would have started around 5000′. Scratch that, in hindsight we would have brought our downhill boards. We booted more that 75% of this thing.

Eventually we hit the creek crossing with substantial snow bridges. Not long after we arrived at the lake. A couple of our friends were snow shoeing with us with plans to chill at the lake eventually meetig us at the car. We had become confident enough in the couloir route so we headed left at the lake and on up. Straight up.

Snow conditions made skinning incredibly difficult so we booted up to a ridge. At this point we noticed the weather coming in from the west. Things would be questionable without visibility. We picked up the pace and topped out at 7100′ just as it started snowing. The sun was still shining though, and we could see the very broad entrance of a couloir. It seemed like it went, but it looked much broader than the one we were after.

With time running out, we boarded up and got ready for our decent. We started down a ridge and I went skiers right to see if I could find the coulior we were after. Nothing that direction. We then debated dropping into the large coulior. After a bit of discussion we realized this had to be it. After booting back up a little to the entrance it was go time. Once we dropped in it was apparent we were in the right place.

The snow was very firm once inside. Lot of chatter on the way down until we found some sun ripened corn. Super mixed conditions all the way down but what a blast. It was steep and adventurous. At one point there was a 30 foot cliff where the snow had separated from the rock forming a schrund. The gap was jumpable but not by much. The rest of the way down was fun, but that’s when the real fun started – find the exit!

Quick edit of the decent:

We traversed to Victoria creek which sounded rageful. Luckily for us there were plenty of downed trees that acted as sketchy bridges. The traverse to the trail was heavy with brush, lots of bushwhacking. With some hootin and hollerin we heard our friends Brandon and John in the distance. We found the “established” trail but they were still off to the left, buzzin through the brush. The trail can be hard to find at times. Eventually we all linked up giving Tim and I a chance to change out shoes. A rainbow appeared along with the drizzle of rain giving us the gamut of weather we often see in our lovely maritime ranges around this time of year. Great tour, would love to rip questionmark coulior again in the winter! 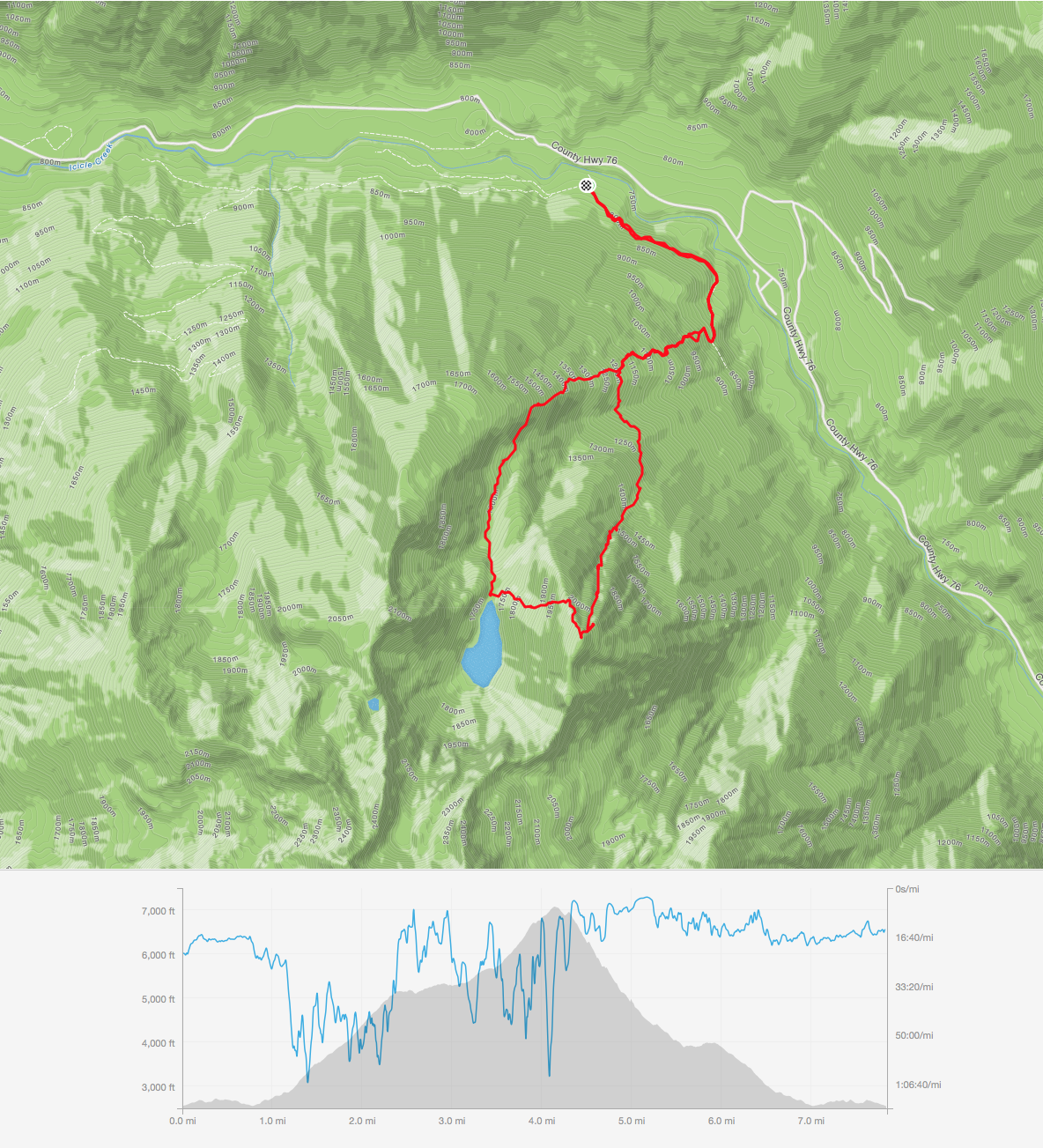 If you’ve ever driven westbound on highway 2 over Steven’s Pass toward Seattle you’ve seen the sign. You’ve seen the establishment, sticking out like a sore thumb. But you probably haven’t been inside. With so many friends aware of this place, having passed by hundreds of times, and not a single report of a visit to this legendary place, we had to engage our curiosity. Results – Very good pizza, definitely worth a visit.