This one has been in the works for a month or two but this last weekend we finally got our schedules to line up with a weather window so the Fuhrer Finger was a go.

Chris and Colby drove in from Utah on Friday and camped out, so Sam and I met them in the Paradise parking lot Saturday morning around 9:00 am. We spent a couple hours arguing over gear and drinking beers at the car before finally setting out around 11:00 am. A skin up to Glacier Vista and a ski down the other side of the moraine put us on the lower Nisqually Glacier where we crossed with out roping up seeing no evidence of anything that opened yet this season. Of greater concern was rock fall and wet slides in which we saw increasingly as the temperatures climbed toward the 51° high for the day. 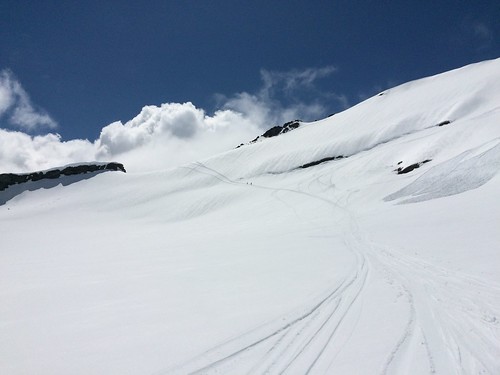 On the other side of the Nisqually we ascended to the Wilson Glacier up a chute know as the Fan. At this point wet slides were a real prospect and we saw several trigger as skiers rode down from their high camps. We reached the ridge at 7800 ft and followed it up to 9000 ft where we made camp for the evening around 4:30 pm. 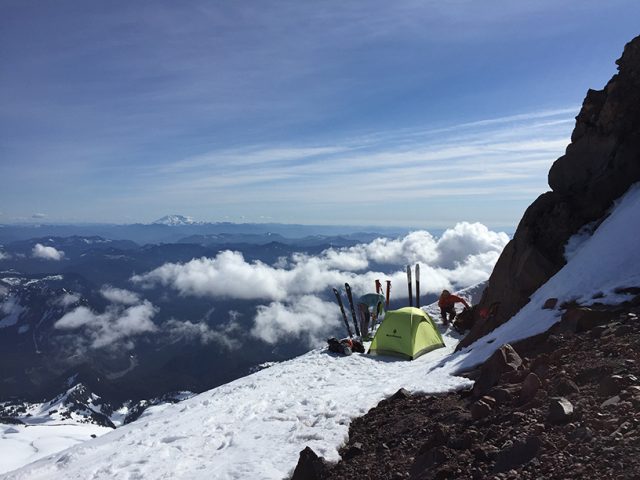 As the sun went down the wind picked up and really whipped around so by the time the alarm went off at 2:30 am it was just as well, we weren’t sleeping much anyways. From the tent we could see the headlamps of several teams making their way up the lower Wilson toward us, in what was likely a single day push for the summit. We wrestled with our gear and fought to stay warm before shouldering our boards and skis, roping up and setting off. This was pretty straight forward although there was a massive debris pile to cross and a few big cracks to side step but then we arrived at the base of the finger. There were a few teams already in it at various stages of their climbs so we unroped to travel easier, switchbacking until it was too steep and front pointing became the only option.

At the top of the finger we were almost forced to stay left onto the ridge as the upper Nisqually is so broken up at this point in the season, trying to navigate it would be a headache. The ridge is much steeper however and provides the crux of the route on both the ascent and descent, a 50°+ pitch around 12200 ft where a fall would have harmful implications. 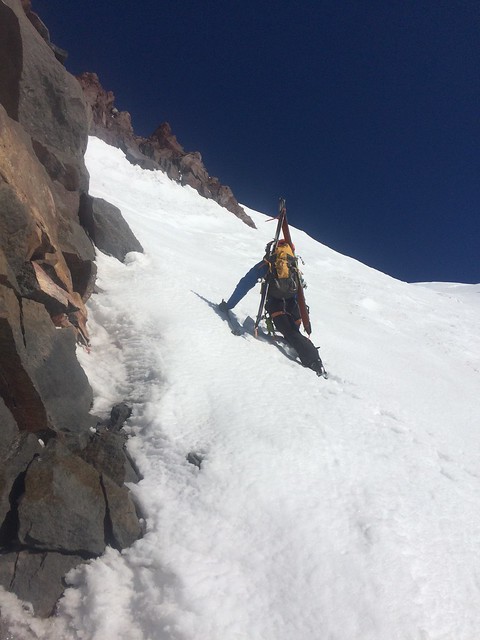 At 13,400 ft we roped up for the final time and made our push to the summit on skins. The splitboard on the feet proved to be crucial when at 14,000 ft the snow bridge I was crossing collapsed leaving me suspended over the void with just the tip of my split hanging onto the up hill side of the crack and my tail on the other side. Good prevailed in the end though and we topped out around 1:00 pm. The weather on the summit was warm and if it hadn’t been for a strong breeze blowing around, tank tops would have been appropriate attire. As it was we were already a few hours behind our anticipated schedule so we hurried down. 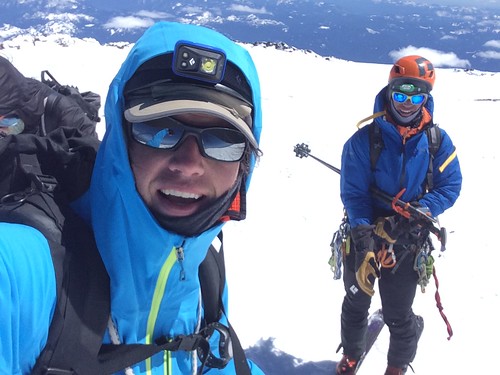 The top 2000 ft of turns left much to be desired, retracing our climbing route as we rode down. Around 12400 ft the snow was beginning to warm, making the crux on the ridge just bearable (though we did see one guy down climbing it). By the time we got to the top of the finger the snow was perfect leaving us with 2500 ft of spring time riding down the Fuhrer Finger, on the tallest volcano in the lower 48. 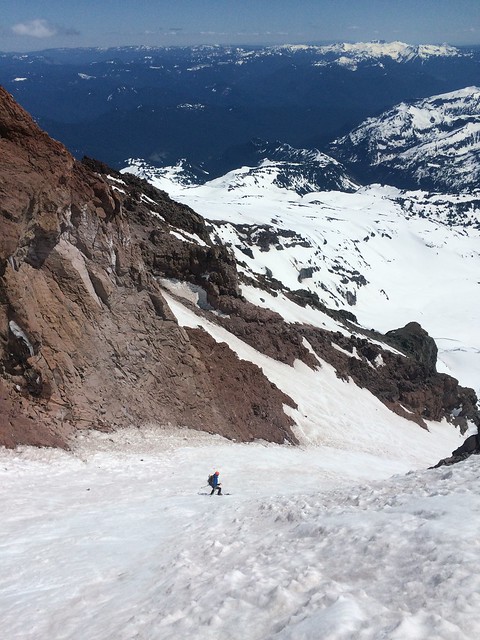 Back at camp we packed up and headed out ready to get back to the car. We enjoyed another 1600 ft of good turning before the snow quality deteriorated completely and turned to slop. A happy first ride off the top of Rainier. Let’s not wait so long to do it again!